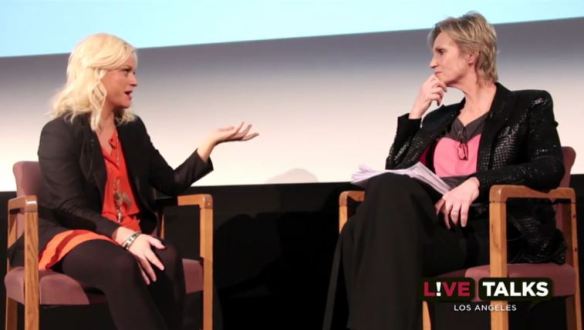 This week’s Live Talk features Amy Poehler and Jane Lynch They interview each other and discuss their comedic styles, their careers, and their lives.  Other Lives Talks have featured Jason Alexander, Michael Caine, Tina Fey, Steve Martin, and John Lithgow. Lives Talks is similar to Inside the Actor’s Studio.

— [On the burnout group in high school]  It was like they had already given up.  It was so sexy.

— Theater people, they know how to close the deal.

Gah! I don’t know why I get sucked into those Shit Blah-People Say videos but I do.  I saw the Shit New Yorkers Say one:

Jacobson and Glazer are slated to write and star in the half-hour comedy, which will center around a pair of twentysomething best friends making their way in New York City. The two are alumnae of the venerable Upright Citizens Brigade Theater in New York, co-founded by Poehler. Poehler (among other famous comedic faces) popped up in the web show’s epic season finale a few months ago.

Eliot Glazer also has a webseries. It’s called It Gets Betterish:

Also, it features prominently in the climax of The Girl With the Dragon Tattoo. Also, (full disclosure) I have this CD.

More music from the giant post it on my laptop.

Target commercial again.  What is wrong with me?!?!

Damages Theme Song.  Literally (imagine Rob Lowe saying it) one of the best shows (drama) I have ever watched.

You don’t have to imagine it, here’s the super cut! Also, watch Parks and Rec tonight!