Modern Comedian is a new web series by Scott Moran.  Moran, a comedian, follows/films/interviews other comedians.  There will be 10 episodes (at least for this season), 3 are already posted, and new episodes are uploaded on Mondays.

The episodes are a nice length, scored by very pensive music.  They seem to focus on a facet of the comedian’s act or personality, rather than the comedian’s biography.

Scott Moran is an up and coming stand-up comedian from Seattle, WA now based in New York City. His material explores his life as a member of the middle class in a silly and sometimes surprisingly poignant, smart-assy manner. Scott is a regular on shows all around NYC and tours the country featuring in comedy clubs and playing indie shows on a regular basis.

From Moran’s interview with thecomicscomic.com:

Were there any other documentary series like this that inspired Modern Comedian? Two things come to mind. The first being the WTF podcast which in my opinion is THE podcast. I know there are a bunch of good podcasts, but I wanted to create something visual where you could learn about a comedian. Also Errol Morris, my favorite documentary film maker, was a huge inspiration.

I love this series and am already hoping for a second season.  I also like finding out about comedians I haven’t heard of yet and this provides a great introduction. Go watch!

Splitsider had a quick write-up on The Paley Center’s 2008 interviews with writers of the The Daily Show.

The advice they give in the video above is true for any dream profession: you have to go out and do things to help you get ahead, because if you don’t, other, more motivated people will and they will will leave you behind in the dust! (Ira Glass gives similar advice)

Even though Jon Stewart is the front man, it is a team effort.

I love hearing about behind the scenes stuff and auditions and finding out who knows who (John Oliver knows Ricky Gervais).  Probably why I also love WTF with Marc Maron. 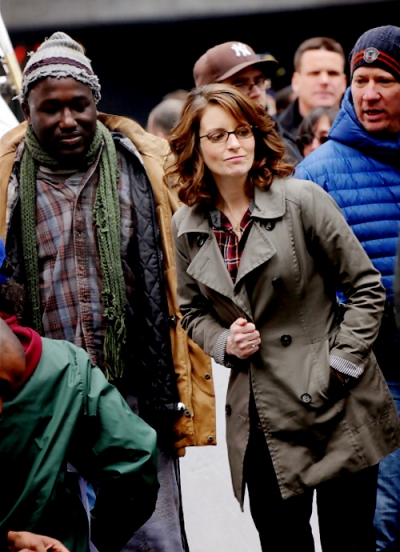 Yes. Yes, that is his real name. No. No, he is not named after Hannibal Lecter.

Hannibal Buress is a former writer for SNL and 30Rock.  He has played a bum on 30Rock seven times (the picture above was taken during filming).  UPDATE: He was on last night’s (5/3) episode as Rus/Gus, the man in the tin-foil hat. Buress’ first comedy album, My Name is Hannibal, released in 2010, is available on itunes.

I recently listened to the WTF with Marc Maron with Hannibal. He talked about how when he first moved to NYC, his sister kicked him out, so he had to live in hostels, and when he couldn’t afford that, he slept on the F train.  Dang, that is a level of commitment I have never reached.

I started listening to WTF with Marc Maron when I was at work.  I was a little worried about the language, but since I sat by myself in the office, I figured it was fine. Uh oh, turns out my laughing was the problem.  The show (podcast) is fantastic.

Marc Maron, in his own words:

“I have a hard time describing what I do or what I am up there on stage. I’ve been called: neurotic, a story teller, heady, cerebral, angry, brilliant, bad, a problem, a cultural critic, a satirist, fucking funny, an important voice, etc…

He interviews everyone in the industry.  From Ira Glass (love him) to Aubrey Plaza (love her) to Jason Sudekis (love him too).  Those are just some recent examples. He is a little manic, a little crazy, a little angry, very thoughtful.  He is not afraid to ask questions that are personal and he definitely talks about his own personal issues.  The podcast usually features some of Maron’s stand-up at the beginning and then becomes an interview.  It is not like hahaha the whole time, sometimes it is somewhat serious too.

Yesterday I read on HuffPo that Todd Glass came out on Maron’s show.

Todd Glass is a great comic (similarly manic and angry like Marc Maron) who I came across on Last Comic Standing.

Listening to the podcast, I was struck by how honest, powerful, and brave it was.  I’m so glad that more and more people are taking a stand against the hate that GLBTQ teens/people face. It amazes me that our country acts like prohibiting people from getting married/having equal rights is a legitimate option.  Bullshit.

The episode focuses a lot about on what it means to be honest, with yourself and with others..  Whether people knew or guessed or whatever, Todd Glass felt that it was important to just be honest about his life. Todd Glass said he was motivated by the recent suicides of teens across the county. Anyway, it is just sooooo honest and real.

Favorite quote from this episode:

“Be a bully for the right cause.”

Update: Just found an article on GOOD about making podcasts that references WTF with Marc Maron